Munster Lawyer of the Year

It was great for Thomas Dowling  to win Munster Lawyer of the Year at the Irish Law Awards last month.  Many thanks to the person or persons who nominated me and to the team here at Hogan Dowling McNamara Solicitors for the hard work that goes into every case.  It really came as a complete shock.  Thomas had not been informed that he had been nominated and deleted the email informing him of the nomination as he thought it was spam.  It was only when someone showed him a post on facebook saying that he had been nominated that he tracked down the deleted email – with only a couple of days to go before the event, his wife Julie Ann had no time to get a new dress for the event, despite having the best of excuses to do so.  Anyhow, making the effort and turning up for the night was well worth it as he came home a surprised and delighted winner.  Many thanks to the judging committee and to all involved on the night. 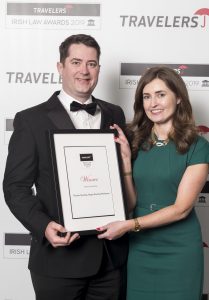 Munster Lawyer of the Year

Here’s a link to some of the other winner on the night: here.

It was a great night sponsored by Travellers Insurance and hosted by Ivan Yates held at the Clayton Hotel, Burlington Road, Dublin.