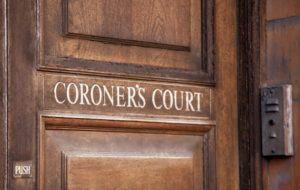 The role of a Coroner is to hold an inquiry into the cause of sudden, unexplained, violent or unnatural deaths – fatal accidents.  This inquiry is called an inquest.  The basic questions to be asked by the Coroner are “how, where and when” the deceased person died.  The Coroner’s Service has a helpful website here.

The inquest is normally held in the local courthouse or other suitable civic building, such as the HSE offices in Limerick.  The family of the deceased and his next of kin will be informed of the intended hearing date.

Statements will be taken by the Gardaí from those persons in contact with the deceased leading up to his death such as a relevant driver in a road traffic accident, ambulance staff who might have attended the scene and operating surgeons who might have performed surgery in an attempt to save the deceased.  Statements will also be taken from the pathologist who investigated or relevant Gardaí.  Those who provided statements and who are considered relevant will be asked to attend and may be subpoenaed by the Coroner.  It is the Coroner’s duty to inquire into the circumstances of the fatal accident or unexplained death and to ensure that all relevant evidence is available.

The inquest itself is quite formal.  The Coroner welcomes the jury and advises them of their role and duties and gives an explanation to them and all parties of what will happen during the inquest.  A foreman is then selected.

The family of the deceased will be welcomed and if they have legal representation then the solicitors or barristers will identify themselves to the Court.

The witness will then be called, or if they are not in attendance their statements will be read out usually by a Garda.

The family of the deceased may wish to question some of the witnesses in order to fully explore the cause of death or the facts or circumstances surrounding and leading up to the death.  This is normally done through legal representatives, but a lay person can do it themselves with the assistance of the Coroner if they wish.

It is also open to the Coroner and the jury to make recommendations of a general character designed to prevent further fatalities which may be appended to the verdict.

The legal costs of having legal representation at the inquest can be claimed if there is a claim for loss of dependency arising from the fatal accident in question.  Thomas Dowling is also on the legal aid panel for Coroner’s Inquests.

Should you have any queries relating to the above please do not hesitate to contact the writer Thomas Dowling by email: tdowling@hdm.ie or phone: 061 501100.